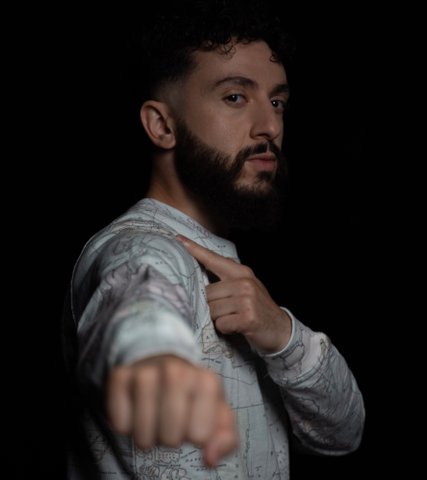 Julian Namroud is a versatile dancer, choreographer and creative artist from Gothenburg in Sweden. What reflects Julian most is his creative mind and openness to movement, which he uses to create creative movement, unique performance and art that speaks both emotionally and visually.

As a dancer, he is based in Hip hop dance, but also finds a lot of influences from popping, house dance and other dance expressions. Since 2008, Julian has found a great love for various movements and dances, where he built a strong foundation as an established dancer. At the same time, he increased his knowledge and vocabulary by taking master classes both within and outside his genre. He has taken classes in hip hop, house dance, breaking, popping, voguing, wacking, step, modern and contemporary with world-renowned dance teachers. He has most recently been seen as a dancer on "Iceolo", which is a two-part piece, including a film and a performance. Scenkonst Sörmland was the producers, where he toured four months during the summer of 2018. Participated as a dancer, actor and choreographer behind the music video "My Past - Arghavan". Nordic champion in Hip hop at the "KOD Street Dance World Cup" 2017/18. During his 2021 residency at Stora Teatern in collaboration with Danscentrum Väst, he has created the performance “StrangerS” as a choreographer and dancer that premieres in January 2022. In 2022 he will also work as a choreographer and dancer for the Nordic performance “The Moral Compass” which will work on the morality issues. Julian likes challenges and unique movements, but finds that the foundation are the pulse of the visions he has. This shapes both his creative thinking and expression, where he has been able to master and develop something that characterizes him. By challenging himself to take different movements and styles

outside its comfort zone and combine this with what he has mastered, Julian creates performances that reflect both his attitude and vision. Repeat and master your foundation, only then can you introduce new movements that work as part of you.

Julian sees himself as a creative, respectful and versatile culture project manager with over 10 years of experience. His knowledge extends widely around stress-, conflict-, financial management, web design and digital tools. He is also educated  as an international cultural project manager at Nätverkstan in Gothenburg, which is a two-year higher vocational education. As one of the founders of ID Crew company, he works with both local and international cultural questions, artists and organizations with sustainability as keywords. As a dedicated culture practitioner, Julian has a great understanding of different cultural scenes and finds good relationships as an important aspect for a more sustainable future in the cultural scene. This has led to him having a broad network of contacts both regionally, nationally and internationally in the cultural sector.

"Your journey begins within yourself, find your passion and let it lead you through life" - Julian Namroud

'Self trust is a must'

Dancer & assistant in the tour Iceolo in Sweden.

Winner at Follo Battle 2vs2 allstyle in Norway.

Dancer in sir Was - the sun will shine, offical music video in Sweden.

Winner at VBG dance festival 2vs2 fusion in Sweden.

Host in the 30 minute piece Identity by Fuse fam in Sweden.

Dancer in Out of office at Trädgår'n in Sweden.

Choreographer and dancer in the 15 minute piece StrangerS in Sweden.

Choreographer and dancer in the 10 minute piece StrangerS in Sweden.

Choreographer and dancer in The Moral Compass  in Sweden.

Choreographer and dancer in Jag är man  in Sweden.

'Only you can set the limit of what you can achieve, stay limitless'

Judge at Tfda Showdown in Sweden.

Workshop at Studio in motion, summer camp in Sweden.

Judge at United 4 Hiphop in Sweden.

Judge at Ung Klubb in Sweden.

Judge at Face the rhythm in Sweden.

Workshop at Blåstället in Sweden.

A special piece that have not been shared before. The pulse of feelings and raw movements in one shot had this one speaking direct from the heart. Creating art to move people. Let us move forward ✨What is your thoughts after this piece? #mentalhealth

In a gaming world surrounded by friends, spending the day out in the park enjoying the moment. Through dance, choreography, story and comedy we welcome you to our GAME WORLD! Hope you like it and get a good feeling after watching this dance film. Special thanks to Dedicated Brand for the collaboration. All the clothings are Fair-trade made, 100 % Organic a Sustainable Fashion Brand with cool clothes. www.dedicatedbrand.com

Arghavan - My Past OFFICIAL VIDEO HD

Schedule, registration & tickets are out on Nordisk Ljus

Schedule, registration & tickets are out on Nordisk Ljus